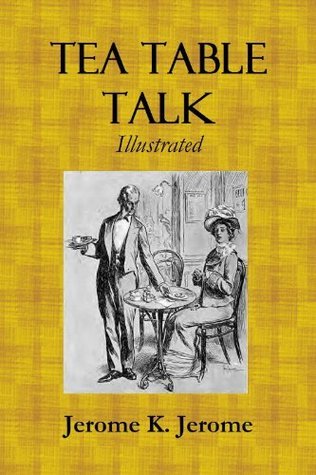 “It never occurred to me that you would care for one.”“It is what I have always maintained,” retorted the Minor Poet- “you have never really understood me.”“I believe a volume of assorted love-letters would sell well,” said the Girton Girl- “written by the same hand, if you like, but to different correspondents at different periods. To the same person one is bound, more or less, to repeat oneself.”“Or from different lovers to the same correspondent,” suggested the Philosopher. “It would be interesting to observe the response of various temperaments exposed to an unvaried influence.

It would throw light on the vexed question whether the qualities that adorn our beloved are her own, or ours lent to her for the occasion. Would the same woman be addressed as ‘My Queen!’ by one correspondent, and as ‘Dear Popsy Wopsy!’ by another, or would she to all her lovers be herself?”“You might try it,” I suggested to the Woman of the World, “selecting, of course, only the more interesting.”“It would cause so much unpleasantness, don’t you think?” replied the Woman of the World. “Those I left out would never forgive me. It is always so with people you forget to invite to a funeral - they think it is done with deliberate intention to slight them.”“The first love-letter I ever wrote,” said the Minor Poet, “was when I was sixteen.

Her name was Monica- she was the left-hand girl in the third joint of the crocodile. I have never known a creature so ethereally beautiful. I wrote the letter and sealed it, but I could not make up my mind whether to slip it into her hand when we passed them, as we usually did on Thursday afternoons, or to wait for Sunday.”“There can be no question,” murmured the Girton Girl abstractedly, “the best time is just as one is coming out of church. There is so much confusion- besides, one has one’s Prayer-book - I beg your pardon.”“I was saved the trouble of deciding,” continued the Minor Poet.

“On Thursday her place was occupied by a fat, red-headed girl, who replied to my look of inquiry with an idiotic laugh, and on Sunday I searched the Hypatia House pews for her in vain. I learnt subsequently that she had been sent home on the previous Wednesday, suddenly.

It appeared that I was not the only one. I left the letter where I had placed it, at the bottom of my desk, and in course of time forgot it. Years later I fell in love really. I sat down to write her a love-letter that should imprison her as by some subtle spell. I would weave into it the love of all the ages.

When I had finished it, I read it through and was pleased with it. Then by an accident, as I was going to seal it, I overturned my desk, and on to the floor fell that other love-letter I had written seven years before, when a boy. Out of idle curiosity I tore it open- I thought it would afford me amusement. I ended by posting it instead of the letter I had just completed. It carried precisely the same meaning- but it was better expressed, with greater sincerity, with more artistic simplicity.